WOW is one of three specific works of time-based art that inspired this blog. Over the course of this project I plan to stay in conversation with these artists, among others, sharing their thinking and creative processes with readers while tracking the progress of their work.

I first heard about “The Milli Vanilli Opera” several years ago while talking to director David Levine shortly after the project’s developmental residency at Watermill. He told me that he was working with composer Joe Diebes and poet Christian Hawkey on an experimental opera framing the story of Milli Vanilli as Faustian Tragedy, and I was intrigued.

My conversations on art and theater with David have been many, varied and vociferous. I was familiar with Joe’s work, having seen a number of his pieces including i/o, directed by Phil Soltanoff, and BOTCH. I hadn’t heard of Christian before, but his work sounded fascinating and the overall project ambitious. Both Joe and Christian use algorithms and information processing to work with found, appropriated, remix and reconfigured source materials – texts, music – in their compositional processes.  David’s work consistently finds new and interesting ways to interrogate the relationship between art, labor and cultural production. I was curious to see how these three artists would collaborate and what would be the outcome. 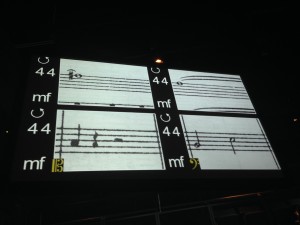 After seeing an excerpt of WOW performed at Experiments In Opera’s evening New Shorts on February 9, 2013, Diebes, Hawkey and Levine had a residency at LMCC’s rehearsal space on Governors Island where they were able to work with singers and musicians, mostly uninterrupted, for several weeks. At the work-in-progress showing on Governors Island in the summer of 2013 I was excited and inspired by what I saw and heard, and was looking forward to seeing the more fully developed version to be presented as part of their BRIC House Fireworks Residency in January.

On January 16th I visited a rehearsal at BRIC and met with David, Joe, Christian and producer Michelle Stern for a long conversation. I returned on January 25th for one of the work-in-progress showings and was astonished by what I saw, heard and experienced. The opera was staged as a multimedia promenade piece using nearly every possible space inside the BRIC House – the gallery, the ballroom and performance space, the media production room and rehearsal studio – and as such was something of a logistical triumph. But more significant from my perspective was the way the opera demonstrably linked seemingly disparate but deeply interconnected problematizing conditions of cultural production – and life generally – in the post-material world.

Between the Governors Island residency and the workshop showing at BRIC the core creative team – along with new collaborators including choreographer Clarinda Mac Low – had managed to craft a true opera of tragic dimensions using the cultural production techniques of the digital age. Where one might have expected an opera where both the orchestra and singers receive their parts as it is composed ‘just in time’ on live feed video monitors to be a mere cacophony of sounds and random text, the work cohered beautifully. The music was complex, often unexpected and surprisingly tonal, the libretto at times oblique and at other times poignant and surprising. The random juxtaposition of the meaningless and the meaningful created conditions conducive to moments of profound emotion, startling clarity and insight.

The audience, led through the space and story by singer Christina Campanella as a kind of omniscient ghost in the machine, was able to experience the “story” of Milli Vanilli while inhabiting the conceptual world of “Milli Vanilli” – a kind of transtemporal digital mediaverse factory of global cultural production. Kind of like a really, really high concept Tron, except that instead of being trapped inside a mainframe computer, we are caught inside a digital era pop music manufacturing plant at the precise moment of rupture when two poor, young, black men were sacrificed on the altar of authenticity, giving their lives so that the manufactured pop stars of the future could live free from onerous public expectations of natural talent.

As I have written previously, our experience of the world is increasingly predicated on infinite unseen digital operations. The logic and operation of the digital layer inevitably informs our perception of physical space and our interpretation of human interaction on all scales from the intimate to the global. I hope that by mapping the conceptual systems of the digital age onto our current systems of interpreting and engaging with live art we can locate intersections to enter into deeper meaning and insight.  The creators of WOW seem to be onto something.