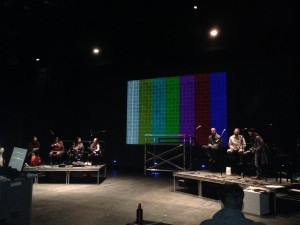 Without yet having seen the show, it seems like WOW starts conceptually from this moment in 1989 when Milli Vanilli is performing for MTV in Bristol, Connecticut and the CD skips, which ruptures the illusion and then there a million conceptual tendrils reaching out from this frozen moment in time.

David Levine: It’s funny, we learned later and are at great pains to stress in this production that, even thought that moment is what stuck in the public imagination, it is not what actually happened. What happened is a lot more logistical, juridical, legal and political – because yes, the CD skipped and people noticed, but nobody cared. What really fucked it up was that Rob and Fab [Rob Pilatus and Fabrice Morvan, the duo known as Milli Vanilli] wanted to sing on their next record. They went to their producer [Frank Farian] and they said, “We can’t take it anymore, we won a Grammy and we hate ourselves, because every day the pressure, the anxiety of being discovered, gets worse! Let us sing on the second album or we’re going to go public.” And, for whatever reasons in his psychology, his reaction was to go public first.

Michelle Stern: The distinction being that when the CD skipped everyone knew they were lipsyncing, but they didn’t at that point know that they hadn’t actually even sung on the album. That was the next revelation. And that was the one that caused them to get their awards taken away …

David Levine: What’s interesting is that in retrospect it just gets compounded. The moment that seems to be super telling – in addition to the fact that the CD skipped before it could get to the word “true” which is just ridiculously poetic – is that the entire story ultimately got boiled down to a moment that didn’t actually reveal them. All that moment revealed was that they were using backing tracks! But this was the high era of dance-pop, everyone knew dancers were using backing tracks, so it’s really strange that it came down to that.

While not overtly narrative, WOW does an excellent job of telling the story of Rob and Fab – not just the known facts of their rise and fall as Milli Vanilli, but in the wider context of the forces at play in their creation and eventual destruction.

Their respective origin stories are contradictory and somewhat mysterious but we do know that Rob Pilatus and Fabrice Morvan were dancer/models living in Munich where they were discovered by legendary pop music producer Frank Farian. Farian hired them to be “Milli Vanilli”, dancing and lip syncing to music he had already recorded. Rob and Fab were both poor and struggling, with ambitions to be famous. When Milli Vanilli’s first record, “All Or Nothing”, was released in Europe, Rob and Fab were credited for “visual performance”. When Arista Records repackaged the record and subsequently released it in the United States as “Girl You Know It’s True” they were credited as singers.

When you look at the basic elements of the story, it definitely fits into a Faust narrative.

Joe Diebes: Yeah, with the Faust thing you really have to start with Frank Farian. As I’m the composer of this piece, Farian’s my main reference point. I’m doing my very literally algorithmic thing and he was doing this kind of “pop algorithm” – he’s actually making the music himself and he’s really good at making pop hits. So I think a lot about how he created these songs and I’ve listened to the songs a fair amount. I’ve listened to “Girl You Know It’s True” a ton because I did the first iteration [of the score for WOW] based on “Girl You Know It’s True”. It has seventeen orchestra hits in it, which is like absurd! Orchestra hits are this 80’s thing – when the first synthesizers came out in the 80’s you hit the note and its like “brehmp!” you know it’s the whole orchestra, trumpets and trombones and everything. And Farian used it like every other measure. But the production of it isn’t terrible. But he’s such a Mephistopheles. I mean, he’s the most monetarily successful German, if not European, producer of music. Ever.

Christian Hawkey: He produced Boney M. and they were huge in Europe. They were  a disco group…

David Levine: They were a EuroDisco thing and they were really important. Ask anybody from any EU country including England, Russia, and they’re like, “Oh sure, Boney M.”  They had club hits, the whole thing, but they were no kind of hit in the US. They didn’t take. And I don’t think Farian had any reason to understand how different the values in the US and the UK were, so he just made another band.

I mean, everybody knew those guys didn’t sing, everybody know that Boney M. was kind of a put-up, but in Europe it wasn’t an issue because they have a different relationship to pop and authenticity – in production anyway … So nobody had any reason to understand that the US had a different take on what pop is, and what was permissible and what wasn’t permissible, because the Europeans – “the Europeans”, you know them? – they’ve got a more laid back attitude towards confection. Which is to say “It’s pop – I don’t need you to be the real singer!” You know? “It’s pop! Whatever!? Maybe you’re the real singer maybe not…”

So the idea that these guys [Rob and Fab] came up with this thing that actually took in the states and actually lined up with a couple of American pop stars but also didn’t – and kind of blew up, was just kind of … it was unassimilable because it was so not of America.

I mean, the logic that would say “put these elements together and become a pop star”  – I have no access to the European logic of what makes a pop icon, I have none, it looks garbled to me. But on top of all that these guys were incredible lip syncers, they were incredibly disciplined, and if you think about that – that is your own only performance job, that is your job night in and night out, you’re lip syncing live, that’s kind of incredible.

Joe Diebes: I mean, if you listen to it without looking at a video, or try not to think of a visual and just listen to it,  “Blame It On The Rain” is definitely a thoroughly authentic R&B song. The production’s very sugary but the real singer is actually quite a good singer.

And if you listen closely to the tracks you can hear that a quarter – if not a third – of the vocal lines in their music are sung by women, you know, female vocalists, like sopranos, and the male voices are very low. It’s actually kind of astounding. If you actually listened to one of their tracks and focused on it you’d notice that there’s like three women back up singers, there’s two guys – well actually it’s more like one guy and three women backup singers, that’s what it is. It’s ridiculous! It’s amazing that they sold it but they were so convincing that nobody really noticed.

Christian Hawkey: But also just on the level of race, part of the “confection” is needing to have the right body, the right racialized body, to represent the music that’s being produced. So this is why Frank Farian brought in Rob and Fab and not a Spanish or Ukrainian singer …

David Levine: Because it’s Soul Music, so you need black people. And it’s not problematic because you haven’t enslaved generations of …

Well, it is problematic …

David Levine: Sure, no, but it’s differently problematic. You know, in Berlin the Chinese restaurants all use that really stereotypical “Chinese” font and its really “CHINESE” in a way that you would never do in the US because it’s just more casual. What signifies as stereotyping, what signifies as what you need to take seriously about racial politics is completely different. So it’s same with pop. “This is black-ish music, we need some black people.” You know? “This is black-ish music by white people and we need some black people representing it.” So the logic is really different. But these guys got sent from one logic into another logic.

Christian Hawkey: In a weird way that’s part of what was really special about Rob and Fab’s act, is the way they appropriated and recombined a whole set of gestures – even if some of them were basic – to create this thing that obviously had a lot of charisma but was kind of unassimilable. Whether it was the shoulder pads or the hair, it was this collapse of quotations spanning Eurodisco and whatever else was happening at this particular moment on the level of fashion – Terence Trent D’Arby, okay, so we’ve got to have the hair and the outfits…. and on top of it to double, to twin each other.

It becomes something that is less set with a particular meaning than it is constantly shedding meaning or generating new and different meanings.  I think there’s something great about that. And that’s what made them great too, in their own way. Their construction was open in the same sort of way as the processes we, as collaborators, are drawn to.

So that unassimilable quality points to how it’s equally problematic and equally essentialist to think you need to create rigidly synchronous alignments between the production and the presentation.  In a weird way – just on a structural similarities – WOW is questioning even the attempt to create the illusion of something similar happening.

And yet there’s a thing where the more you’re attempting to create the illusion of a perfect symmetry, the more difference is being erased or attempted to be erased.  And so this is the moment where the CD skips, though it wasn’t the direct moment that undid them, it is this moment where the machines fail and suddenly highlight the non-similarity. All of a sudden all of the forces that went into manufacturing this thing that is Milli Vanilli are suddenly foregrounded as forces, as structural and not symmetrical, and so that asymmetry becomes apparent.

This is where I locate the politics of what we’re doing to a certain degree. It is in the way that we work together, in the way we work individually, in how these things come together. It’s sort of championing the failure of the lip syncing as kind of resistance to totalizing spectacle.