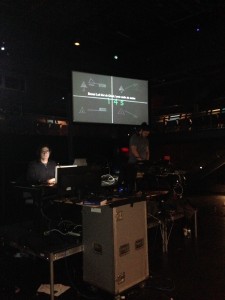 That seems like a good prompt to talk about how you are working together and how this opera operates.

David Levine: Christian and I met years ago when we did an interview for The Believer. And I’ve known Joe since back in the GAle Gates days. Joe and I were in Berlin talking about what project to work on, and I’d always wanted to do an opera about Milli Vanilli…

Joe Diebes: And there was this moment where my stomach turned and I was like, “Wow that’s kind of fucked up.”

David Levine: And I was like – No, no, dude, but it’s all about tech and vocal displacement!

Joe Diebes: I have always been interested in a certain amount of irreverence towards the operatic form, and I thought if I’m going to fuck with the form then Milli Vanilli would be a pretty good one. And the idea of this project connects totally with my interest in the digital and the relation of the voice to the digital, voice to the machine, a voice that is being dislocated. I’m coming into this more formally and I was thinking about it in that way of “What is the situation Rob and Fab were coming into?” I think of the music industry of that time as being a real machine  – not only for making hits, but also the emergence of drum machines, synthesizers, networks and so on.

David Levine:  I was interested in the story from a few perspectives – how MTV was changing the relationship to live performance, for instance.  It was basically Faust – you sell your voice to the music producer for fame and then when you want your voice back Mephistopheles won’t do it.

But what I’m always interested in is that moment when performance stops being inspiration and starts being work, and also confronting this myth that these things are separated in some way. So I wanted to explore this whole idea of what Rob and Fab were performing, was it satisfying for them to perform it? If they didn’t’ feel like they were really performing, what did they think they were doing and what is audience love if you don’t feel like you earned it, if you’re just working…. All those questions….

Christian Hawkey: What drew me to the project as a writer and as a poet was not just that you would choose this subject that is so counter to opera or poetry, but because it is a story that hinges so much on the voice and authenticity. This is a fraught subject within contemporary American poetry – the idea of the author having a voice and the voice being a site where the performance of voice codifies authorship and lends authority to a text. I’ve been interested in resisting that, so this project made a lot of sense right away.

David Levine: All three of the disciplines we came out of have a certain preoccupation with the idea of an authentic utterance. We all glommed on to this story as a way of combatting that idea and what that is supposed to mean in a larger sense, not just in our own disciplines.

Joe Diebes: I took my cue from the libretto because I feel really in sync with Christian’s effort to balance the procedural and the poetic. Each of his poems or texts has a fairly clear operation that’s not strictly mechanical, but it’s clearly resonating with a larger world of programming, investigating the way databases and search engines are working, automating various text filtering and processing behaviors.

There’s a strong echo of that in his work, and with my work with music I’ve been entirely interested in how the language of computer programming can interface with a more poetic approach to music.

There’s a way of making random sound that is random, but it’s not very moving, it’s not very viscerally interesting. Conceptually you’re like, “Okay, that’s random sound.” But I’m actually interested in the balance between how one uses non-poetic or non-artistic languages, techniques and procedures and somehow bringing those into relationship with a more visceral, or intuitive, or perhaps even more traditionally musical, sensibility.