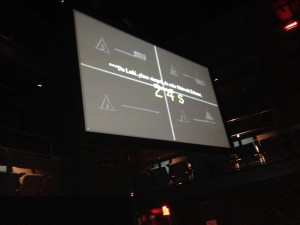 Christian Hawkey: One of the things that I decided to do early on was to plagiarize, plunder and text sync the entire libretto, kind of out of solidarity with Rob and Fab.

For one section I used passages of Baudrillard to converse with an online chatbot and then used the results to reframe, reshape the text into kind of a song, so it has this kind of machinic, disembodied, haunting affect…

Joe Diebes: This is a really good example of something that has a really clear operation or procedure but the actual effect of it is quite musical. It’s a very sensuous, lyrical text actually but it’s also very clearly doing everything procedurally…

David Levine: So Joe latched on to that in the text and then he set it. So far all the workshops have been Joe setting things that he liked from Christian’s database and then me thinking about what would fit into an arc and how to make it into an arc.  So that’s kind of how we did it.

Christian Hawkey: And I am interested in engaging with machines in this way and remixing what comes out of them, so it made sense to me to also use Google to generate text.

I started inputting phrases like “I faked my” or “I’m ashamed” – which was a quote from Rob Pilatus – and then let Google auto fill the rest. In this one movement the libretto is entirely composed of suggested searches returned by Google – there’s inevitably a real percentage of human tragedy in all the responses to a query that begin, “I’m ashamed of”.

This particular story is partially about appropriation and the politics of appropriation. But the themes are resonant on a wider level of just, you know, faking it. What is the relationship between faking it and failure and shame, and how do corporate structures produces these affects in some way. So when you do a Google search what emerges are partly these individual private voices that have made themselves public but at the same time they resonate with all these other issues…

At the same time, I’m interested in setting up a system and also setting up the rules by which you break the system! So some of the texts have my own writing in them that serves to disrupt anything that becomes too mechanical in a way.

David Levine: This was the radicality of the libretto in the first place.  We all agreed that everyone knows the story already, so the libretto didn’t need to be narrative. And I was really interested in playing with the very limited gestural vocabulary of the opera form, so I knew that I was going to structure the staging episodically. The familiarity of the story and the limited gestural vocabulary of opera formed a kind of “fixed” layer, so to construct the libretto Christian basically did was he made a Bible of stuff, which we’ve tapped maybe 1/16th of –

Christian Hawkey: A database is a good word for it. I thought of it as a database that could function metonymically. The text is intentionally not narrative or expositional, but once it is juxtaposed with something else – i.e. the staging, music, whatever – it creates something unknown.

When I first met Clarinda [Mac Low, the show’s choreographer] she was talking to me about the libretto and she was saying, “I don’t understand any of this, what is this?”  And said let’s just try it and see how it goes.  Once things started being put through speakers, and bodies started being moved around, then it hit her that actually everything makes incredible sense – but not in a way that is often redundant. It’s not like a normal opera where the story being told is the same story as the staging, and then the two come together. That redundancy kind of bleeds all the productive tension out of the opera, in a way.

David Levine: And Clarinda really quickly glommed onto the fact that Rob and Fab only had about 15 moves. So she’s actually broken them down into their component parts and these  keep getting recombined, altered and modified also, often at random.  The dancers know each move, so Clarinda can call out “Deformed Cabbage Patch” and they know what to do. Clarinda’s rehearsal approach to the choreography was to break it down into units, so we have this super-primitive – or basic – choreographic language and the limited repertoire of opera. So we’ve got these two limited systems that kind of work together in different ways at different times.

It is that kind of repetition I want to work against and it’s a big reason that I wanted to open up the score to be this generative thing that evolves differently every time. The orchestra is doing something very different every single time. I’m basically DJ’ing them. I have my little setup and I can control what gets sent to them and the melodies get superimposed on the libretto differently every time. But at the same time it is a database that all the singers can access – like random access – for these different melodic phrases. The singers and orchestra have learned all the various elements, they know what the lyrics will be but not the melodies.