I met the artist Blake Carrington for coffee yesterday and had a great conversation riffing on the video I made. I met Blake when I was working at LMCC and he has a residency on Governors Island. His work encompasses a wide range of practices and he also teaches new media art theory and practice. His work ranges from making complicated electroacoustic things with MAX to doing really beautiful ink on paper drawings. Most recently he started Personal Desire Propaganda, a collaborative silkscreen print label.

The first thing Blake showed me when we sat down was this diagram he made to illustrate the artist-artwork-audience communication system espoused by Stephen Willats: 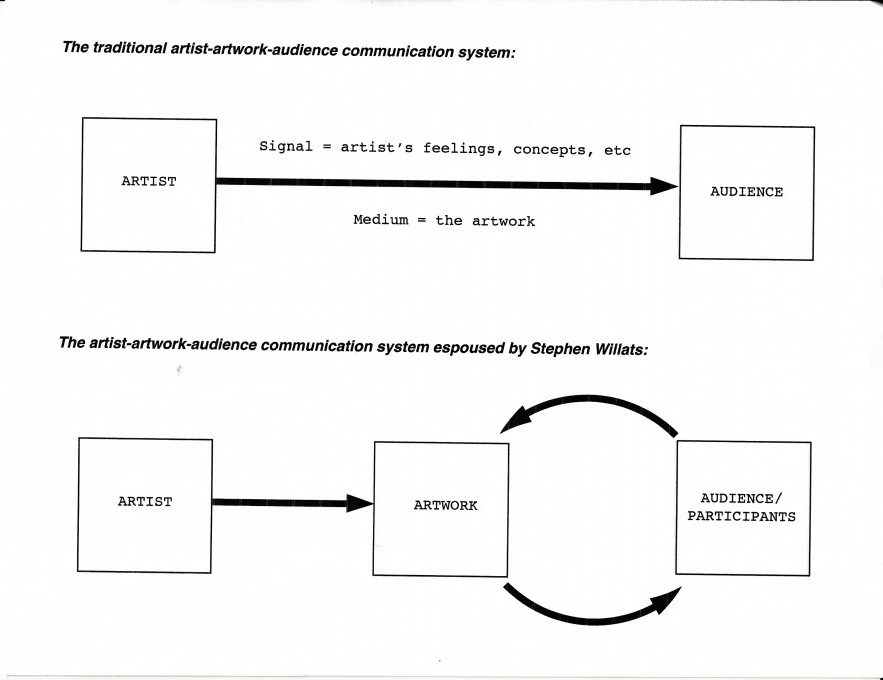 Which was interesting, as I wasn’t familiar with Willats’ work. It is still a bit simple for what I’m trying to get at, which Blake and I dug into further. He pulled out another piece of paper with a series of questions responding to the questions I’ve been posing on this blog and to the video including:

The Problems of Boundaries of Objects:

And our conversation spiraled out from there. The Willats model is only barely sufficient to engage the complicated interaction of the “perceiver object” and the “art object” and once those multiply – as they do in live performance or networked performance – it is wholly insufficient. So part of the challenge is about modeling these interactions with greater and ever-increasing levels of complexity. We’ll come back to that another time.

Our conversation went on for awhile but one of the things that came up – and seems to keep coming up in different contexts – is the idea of “writing the score”.  Blake has created a project called A Strong Hand That Nonetheless Gets You Nowhere which is a book of open-ended scores which he invited artists to enact. The event was presented at Kunsthalle Galapagos by This Red Door.

The project was inspired, in part, by Hans Ulrich Obrist’s statement that Mies van der Rohe’s  plan for temporary structure the Barcelona Pavilion was a score for rebuilding it. In Blake’s project,” each notated plan is a score for collaboratively building something ephemeral, immaterial, active, abstract or ambiguous.”

I had only recently seen Beth Gill‘s New Works For The Desert at NYLA and had been admiring her gift for composition, for clean, clear lines, well articulated gestures and spare movement vocabularies, nothing wasted. I was thinking about how choreography is a type of writing, and how Beth Gill is such a meticulous craftsperson.

Maria Popova recently posted Zadie Smith’s 10 Rules of Writing, one of which is:

Don’t romanticise your ‘vocation’. You can either write good sentences or you can’t. There is no ‘writer’s lifestyle’. All that matters is what you leave on the page.

Which resonates with me. As someone who spends a lot of time writing, and thinks like a writer, I tend to see other forms through that lens. Gill knows how to write good sentences. She thinks very deeply about what each gesture is meant to convey, how it reads, what the totality of the embodied presence is meant to imply at any given moment, how it looks in space and time, how gestures appear, accumulate, disappear and return over time. Each dance tends to be spare and focused, but is composed of incredibly dense matter.

This took me back to David Neumann‘s Sentence, which was one of the first dance works to really draw me in and convert me into a lover of the form. Premiering at PS122 in February 2003, Sentence took its inspiration from Donald Barthelme’s notion of a sentence. Neumann also knows how to write great sentences, though his style is much looser and more humorous, he writes in great sprawling sentences that wander around the stage, referencing everything and accumulating meaning as if by accident, offering throwaway wisdom at every turn.

It is interesting to think about the consonance between all these various types of writing and the scores associated with them: an architectural plan can as a score for rebuilding a structure, a musical score as a prompt for rebuilding sonic environments, a play script or dance notation as scores for (re)constructing embodied presence in space and time, and code as a score for computation. But in each case the score is, in and of itself, insufficient. Indeed the implementation of the score is deeply dependent on our understanding of what the score is meant to help us create or recreate. And that is where, I think, it really gets complicated.